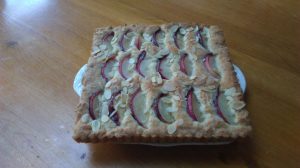 This recipe is so very versatile and can be used with any fruit you like. I often replace 100gms of the flour with ground almonds and a touch of almond extract. I then sprinkle flaked almonds on the top before baking. Other variations: cinnamon added to the base mix, ginger added to the mix especially if using rhubarb, chocolate chips added to the base and then sliced pears on top. The combinations are endless and as always I want you to make it your own.

It makes a welcome after dinner desert or something special for tea time. Serve it with double cream or lashings of custard but my favourite and it’s hard to admit it but evaporated milk is the best over a warmed slice!!!!

Fruit of your choice (sliced)

Rub the sugar, flour and butter till resembles fine bread crumbs , mix in the beaten egg may need a touch of milk depending on the size of the egg.

The mixture does not need to come together in a ball as the mixture is then to be pressed into a tin, (the base mixture need to be about 1cm deep)

Slice and arrange the fruit on top, make this decorative sprinkle with a little sugar and a few knobs of butter and bake until golden brown and the base mixture has puffed up around the fruit.